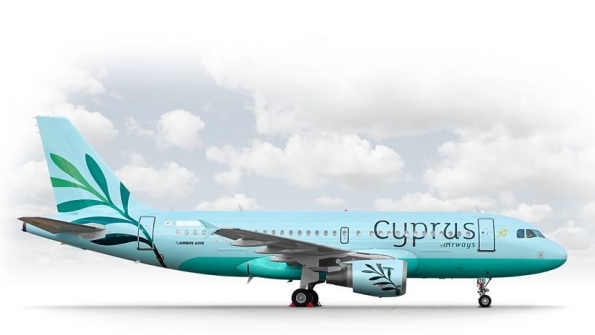 BritsinCrete has learned that the new, rebranded Cyprus Airways, on July 24 opened up passenger bookings for flights between Larnaca (LCA) and Chania (CHQ).  The de-facto #Cypriot flag carrier took to the air in its new colours in June 2018 with flights between #Larnaca and Athens.

Cyprus Airways says the route to #Chania is seasonal until September.

Obviously notching up maximum daily flying hours, an A319 has a late night utilisation for LCA-CHQ on Tuesdays and Saturdays. Flying time in each direction is approximately 90 mins. Allocated flight numbers are  CY468 departs Larnaca (LCA) at 2130hrs. The return flight from Chania (CHQ)  - CY469 leaves at 2355.

A glimpse of the revamped #Cyprus Airways can be seen in a You Tube video  taken by a passenger on one of the first flights from Athens (ATH) to Larnaca in June.

The fresh pale blue livery with the iconic Olive branch motif on its aircraft is a distinctive and memorable design. Cyprus Airways is owned and operated by Charlie Airlines Ltd (S7 Airline group) under a 10 year contract with The Ministry of Finance, Cyprus to use the national carrier trademark. As of publication date, other destinations from Larnaca include Tel Aviv, Beirut, Zurich, Stuttgart, Verona and Prague.
Information
Share